Sarah has served as Minister of the Word with the Wesley and St Aidan's congregations in the Canberra Central Uniting Church Parish since January 2018.

Ordained in the Uniting Church in Australia in 2010, Sarah previously served as the facilitator of alternative church ventures Black Wood Jazz (2005–2009) and The Esther Project (2009–2010), and as sole minister in the Belair Uniting Church congregation (2011–2014).

From 2015–17, while undertaking a PhD, Sarah was sought after for pulpit supply across southern Scotland, in Edinburgh, Glasgow, Stirling, Falkirk and the Upper Clyde Parish, in Church of Scotland and United Reformed congregations.

While in Edinburgh, Sarah also continued her involvement with 'fresh expressions' of church as participant in The Gathering and as part of the support team for Methodist Church Venture FX workers. She was an active member of the Greyfriars Kirk congregation in Edinburgh, regularly called upon to offer her gifts of reading, performance and poetry.


Among all the sublime and profound everyday surprising conversations with inquiring young and old minds, playgroup play dough and swing pushing duty, and serving communion to a mentor who was dying from cancer, some of the notable things Sarah has been able to do as minister include

Collections of story, poetry, prayer and liturgy for the season of Advent/Christmas/Epiphany available through Proost.

Find a prayer-poem for one of the lectionary texts each week from Sarah at Pray the Story. 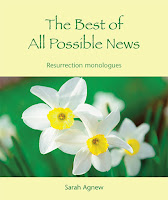 Easter story encounters available for download through Wild Goose Publications.
The Best of All Possible News: three monologues in the characters of Mary, Peter and Thomas, after the resurrection of Jesus.
Walk to Emmaus: a poetic encounter with the story
With Intuition, Imagination, and Love: gathering for contemplation and anointing, shaped by poems by Sarah Agnew and Jan Sutch Pickard.

Sarah has also written prayers for church events, Seasons of the Spirit, and has poems in Wild Goose Publications collections, Winter, Fig Trees and Furnaces, and the Wild Goose Big Book of Liturgies Volume 2.

Popular posts from this blog

oral communication and the relationship between speaker and listener

Have you heard church leaders, preachers, theologians bemoan the lack of ability of congregations today to listen to a sermon?
Listening audiences are accused of having short attention spans, requiring multi-media delivery of a message, not valuing oratory. But is this true, or fair?  Should the 'blame' be shouldered, at least in part, by the preacher?  I suggest that we have lost the ability to communicate orally, not just to listen attentively and to hear.  Can we regain the skills of oratory, utilise tools of performance, and once more hold an audience for longer than 13 minutes (a time suggested in a book called The Prodigal Project as the ideal length for a sermon)? Can we help listeners learn again to be attentive for longer, to hear a message and hold onto it after the blessing and the handshake at the door?  And should we even strive to achieve these goals? Should we even bother? Or do we abandon the oral communication of our sacred texts for the more culturally popula…
Read more 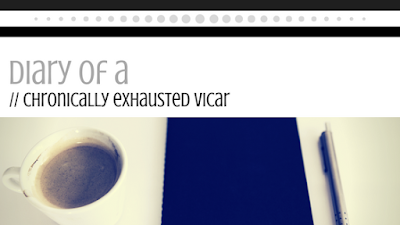 My friend encouraged me to write lament through this experience of worsening Fatigue. It is a positive sign that I am writing, for writing is a path to healing for me. When I cannot write, I feel truly unwell.


lament of the chronically fatigued vicar
my people are gathering
and I am not with them;
the congregation together,
I on my own

your people will join
their voices in praise,
confess our collective turning away,
receive your welcome, your grace

your servant will sigh
her stilted praises,
reaching for joy, yearning for peace,
searching for you, alone

your people will sing
the Sacred Story,
hear it, proclaim it, commit
again to enact it, together

your servant will honour
your Story, her story,
in stillness
and the small piercing silence


my place with my people
stands empty today;
though another will speak,
only I can be me

the cost – the cost!
I count, and lose;
the gift, the gift
I would claim, I would

Oh Holy One,
hear my cry!
ease my pain,
help me remember

your people, as they gather –
you are with them;
though I …
Read more

'I covet your prayers.' No, I do not think you do.

I have been pondering a phrase I have seen a few times recently: 'I covet your prayers.' Every time I see it, I ask myself, 'are we supposed to not covet, according to the commandments?' And I wonder, what do you mean?

The Hebrew translated as 'covet' here, means to desire and try to obtain. The English word 'covet' carries the meaning of yearning to possess. The prohibition really is about property. Respect the property of your neighbour, avoid jealousy…
Read more